After killing Alexander Hamilton in a duel in 1806, Aaron Burr became an outcast from New York. Upon completing his Vice-Presidency, he moved to the southwest. Later, he was arrested for treason in Mississippi. He escaped and was recaptured in 1807. During his transfer from Ft. Stoddard to Richmond for trial, it has been said that his party stopped for water and rested at the site that is located at Boatyard Lake.

This water tank is the first of its kind ever built in 1915; and one of only two concrete water towers built in the United States. It has always been the tallest structure in Bay Minette. 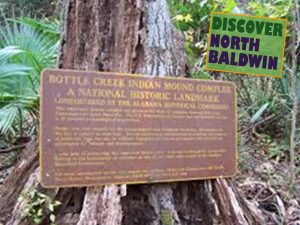 Bottle Creek is one of the more important historic Native American sites in Alabama, second only to Moundville. Bottle Creek was occupied from about 1250 and probably served as the principal political and religious center. Bottle Creek continued to be an important site for local Indians such as the Mobilians, well into the 18th century. The French explorer and founder of Mobile, Jean –Baptiste Le Moyne de Bienville, is believed to have visited the site in 1702.

Now owned by the state of Alabama, Bottle Creek was declared a National Historic Landmark on March 10, 1995, joining Moundville Archeological Park as the only other Native American site so recognized in the state of Alabama. It is administered by the Alabama Historical Commission.

The Cantonment Montpellier Site proved to be vital for the fallout after the Battle at Fort Mims from 1817-1821 and Federal troops were encamped at this site. Training took place at nearby David Tate’s Plantation and barracks were built to house soldiers. Artifacts from this site are housed in Montgomery state agencies. 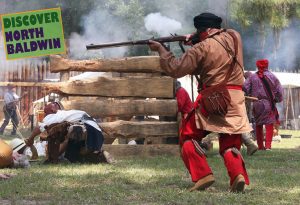 Historic Fort Mims State Memorial Park is the site of the Battle of Ft. Mims, where more than 500 soldiers lost their lives to the Creek Indians in August 1813. This battle became recognized as one of the most horrendous battles in U.S. history. The Fort Mims restoration Association commemorated the 200th anniversary of the battle in August 2013.

The site is located 7 miles west of Tensaw, a community on AL 59 roughly 45 miles north of Mobile and roughly 25 miles from Bay Minette.

A brick Military Hospital built near Fort Mims and Fort Pierce by Thomas Hart Benton (1782-1858), and named for General Lemuel Purnell Montgomery, who was killed at the Battle of Horseshoe Bend while serving under Benton and Jackson.

Enclosed during the Creek Indian Wars, with a mile of stockade pickets, this site contained cotton gins, sawmills a grist mill and slaughter house but suffered heavy damage during the wars. Also the site of the first public school in Alabama, a “Blab” school, begun in 1779 by John Pierce. Referenced as such due to the variety of languages spoken at the settlement; French, Spanish, English and a variety of Indian tongues.

Fort Pierce and Pierce Mills Site was a community kept alive during the Creek Indian Wars. This industrious village comprised of several mills and the state’s first public school. 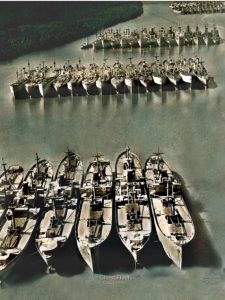 This is a sunken site located around the area of the county owned Cliff’s Landing in Bay Minette.

The Ghost Fleet, or Tensaw Fleet, was an armada of mothballed Liberty Ships and other Navy crafts that were parked on the Tensaw after World War II. During its peak, there were 347 ships in port. President F. D. Roosevelt made plans to refurbish the vessels so the merchant marine fleet would be better equipped for merchant marine service, which during 1945-1973 was considered a viable military resource. Consequently, the Ghost Fleet supplied many jobs for Mobile and Baldwin County residents, especially for people in Spanish Fort, Bay Minette and other surrounding areas near the Mobile-Tensaw Delta. The last ships were given to the state conservation departments in Alabama, Mississippi and Louisiana and many were sunk to create fishing reefs. 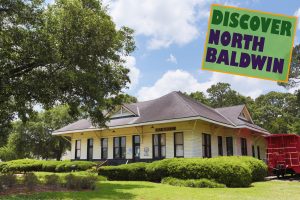 Abandoned by the railroad in the late 70’s, this building once served as the social hub of Bay Minette. During the early and mid-20th Century, it was from this building that the telegraph office would keep businesses and residents informed of news and events such as when the county courthouse moved to Bay Minette.

Relocated in 1984, it was restored and now serves as the office of the North Baldwin Chamber of Commerce. Over two years of community interest and fundraising went into completing this project to include businesses, individuals and children with such notable contributors as, then Governor George Wallace.

This historic building served as a backdrop for the movie Close Encounters of the Third Kind. In recent years, Seaboard Systems Railroad donated the SCL & N Caboose #114 to the City of Bay Minette, which was quickly refurbished and moved on site at a later date. 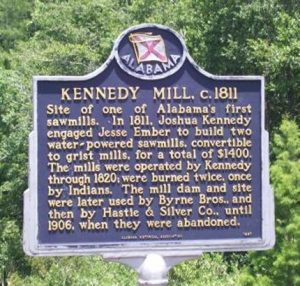 This is the site of one of Alabama’s first sawmills. In 1811, Joshua Kennedy engaged a builder for two (2) water-powered sawmills, convertible to grist mills. Operated by Mr. Kennedy through 1820, the mills were burned twice, once by Indians. Ruins of the water-powered mill pond dam can be seen beneath the bridges on state highway 225 just south of Stockton.

This is one of the very oldest Masonic Lodges in Alabama. Its charter was moved from Blakely to Stockton, and in 1865, it’s sword was stolen by Union troops but returned in 1878.

Mural: Removal of the County Seat

“Removal of the County from Daphne to Bay Minette” by Hilton Leech in 1939. It was restored and moved to the current post office building in 1987. Refer to the Baldwin County Courthouse (At top of page) for a brief history in this listing. 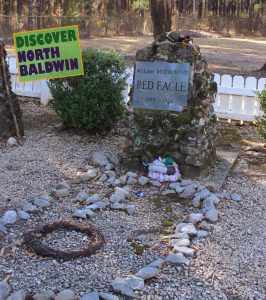 Directions: Highway 59 to Little River Fire Station, go west on to Dixie Landing Road. You will see a sign that says “William Weatherford Red Eagle Grave Site 1 Mile.” Turn left on to T.J. Earle Road. Continue past St. Joe Baptist Church, and then turn right on to Red Eagle Road. The grave site will be to your right.

William Weatherford, born April 28, 1780, near Montgomery, was the son of Sehoy III, Princess of the Wind Clan. During the Indian Wars of 1812-1814, he became known as “Red Eagle”, leader of the Red Stick Creeks, and led the battle against Fort Mims on August 30, 1813. He died in 1824 and was buried alongside his mother. In 1991 Baldwin County Commissioners dedicated this site as the William Weatherford Memorial Park, which is eligible for the National Register.

Picnic tables are on site. 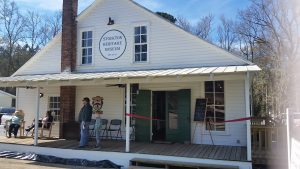 The Museum is open the 3rd Sunday of each month 3:00pm – 5:00pm for special programs and exhibits.

Brief History of the Museum Building

The building was erected in 1894, by Fredrick S. Bryars and is one of the earliest remaining mercantile stores in Stockton and North Baldwin County. It also served as the Stockton post office from 1894 until late in 1918 with three different post-masters: Fred Bryars; his wife, Lucy (McMillan) Bryars; and their nephew, Dugald Crosby, Sr., who purchase the business in 1912; and served as postmaster from 1913 to 1918. Crosby changed the name of the store from “The Fred Bryars Place”, to the name of “D. Crosby Mercantile Co.”

In 1918, Y. A. Cox, Sr. and P. A. Bryant assumed operation of the business with Dugald Crosby, Sr. retaining ownership of the building and the property. Another new sign went up on the store front, “Bryant and Cox Mercantile”, and a new post office building was built across the road from the store. Bryant later left the business. Y. A. “Joby” Cox operated the store for 52 years, closing its doors in 1971.

The building remained vacant until 1975 when the Stockton Five Arts Club got permission from the Crosby family to refurbish the old structure. It then assumed the name of the “Stockton Town Hall.” It was used by the Stockton Double H. Club for several years, and later by the Stockton Civic Club until they built a new civic building in 2009.

The association started “Stockton Sawmill Days” in 2013 to raise funds to restore the building for a museum. This festival is held the first weekend in November, and the entire community takes part in putting on the event.

“The Stockton Heritage Museum exists to showcase the relationship of the people, past, present, and future, to the land and events that shaped the course of Stockton’s unique history, heritage, and culture. Our mission is to collect, preserve, interpret and promote the historical and cultural artifacts from this North Baldwin community. We are committed to exhibitions and programs that will strengthen our community, honor the generations of the past, and connect present and future generations to their heritage.” 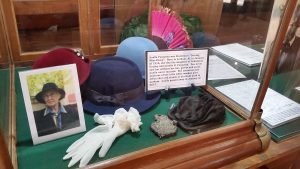 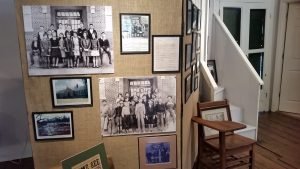 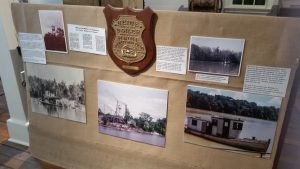