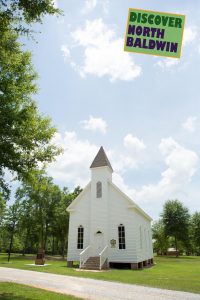 Bicentennial Park is a 367 acre park containing a two mile nature trail with overlooks onto preserved wetland areas, which feature a unique natural habitat and home to a wide range of indigenous wildlife.

The Baldwin County Commission designated the 367 acre area on Highway 225 in Stockton, Alabama, to be the location of the Park. The park is dedicated to preserving the county’s rich culture and leaving a historical legacy for future generations.

The park offers a unique family experience and provides extended hands-on opportunities for school children to learn about the county’s history.
As of June 2014, the county’s proposed exhibits, which are still in the planning stages, will possibly include a traditional museum, filled with Baldwin County artifacts, as well as the art “Living Museum” exhibits. The park may also include an 18th Century Native American settlement, a 19th Century American Village and an 1840’s working farm and much more. All of these exhibits will be approved by the Commission throughout the year. 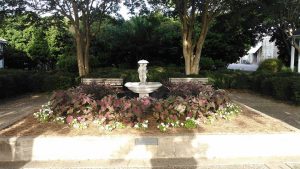 Located on 1st and Hoyle, the park was dedicated to honor the memory of J.B. Blackburn, a man who provided many contributions to the area and the law profession.

The park serves a venue to a wide variety of events. From weddings and food truck expos to the annual Christmas Fest, the park is a lovely place to have a lunch during business hours or come take pictures for a wedding album. 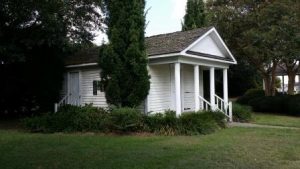 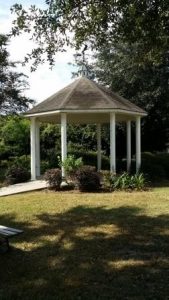 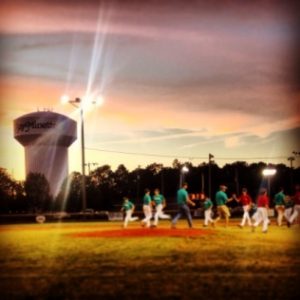 This park is home to several baseball fields, a small playground area and a covered pavilion. Bay Minette Youth Baseball League oversees the operation of the youth summer and fall leagues. The group is a part of the Dixie Youth organization. 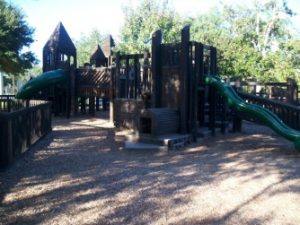 Built entirely by volunteer labor in 2000, the Community Kids Park is home to a playground wonderland with towers for climbing and exploring, swings, slides and a special area for toddlers to play. Included on the block are other amenities as well including a tennis court, pavilion (which can be rented) restroom facilities and picnic tables throughout the park. This location is also home to the Splash Pad Water Park.

This small county park features a dipping vat used in the early 1900’s. Prior to stock laws, animals ran on open range often becoming infected with tick fever. It was required by law that vats be used by citizens to dip cows and horses to prevent animal diseases. After dipping, the animals were dabbed with paint as proof to Rangers. 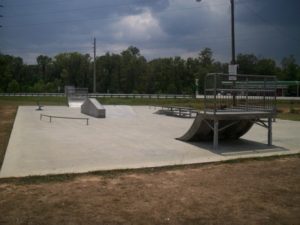 Skateboard Park is on McMeans Avenue, next to Halliday Park and across from the Bay Minette Post Office (Which is home to the Mural “Removal of the County Seat”, see “Sites to See” )

This is an unsupervised facility where participants must skateboard at their own risk. 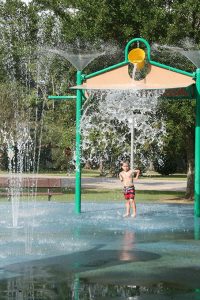 ​The Splash Pad water park area is located at the corner of McMillan Avenue and 4th Street as part of the Community Kids Park. The splash pad operates in the warmer seasons and features a number of amenities including geysers that shoot water from the ground, water rings that offer a cooling mist and giant water cannons, among other attractions. 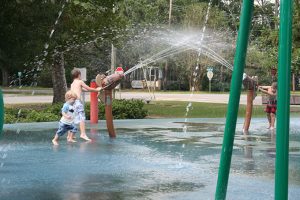 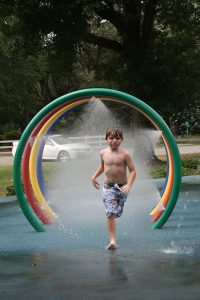 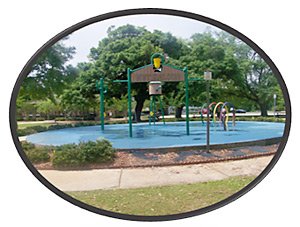 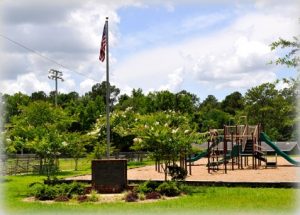 The park is named for the late U.S. Seaman Vincent Lenard Ulmer who died while serving his country. He served aboard the USS Stark in the Persian Gulf when it was attacked. He was one of 37 sailors who died as a result of the attack. 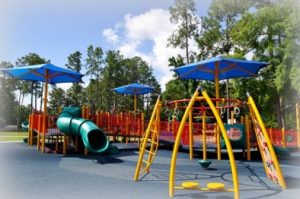 Built in 2011, the Universal Playground was funded through a grant provided by The Alabama Department of Economic Community Affairs in addition to local matching funds provided by the City of Bay Minette. The park is located at the corner of Bradley Avenue and East 12th Street at the Municipal Pool Complex.

The park features typical playground equipment but with a design that accommodates those with special needs. The play area includes zip slides, climbing walls, various slides, umbrella canopies and American with Disabilities Act-approved amenities. It also includes double ramps to allow for multiple wheelchairs and the groundcover is concrete with a padding overlay to make it easier for wheelchairs to maneuver through the park. 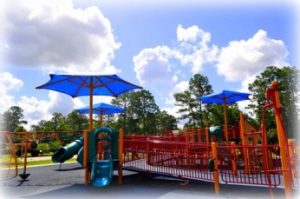